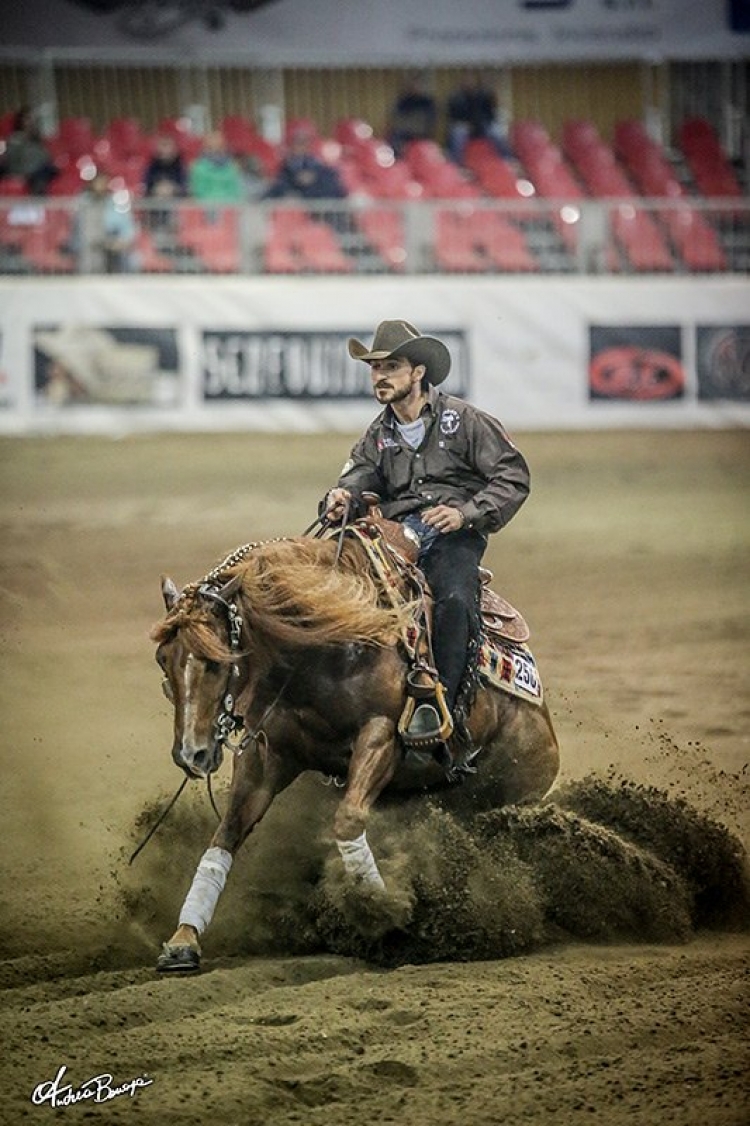 For the Italian NRHA Professional, the win was special for more than one reason: With SG Icetopman’s sire between the reins, he won the first major event title of his career — the 2012 Italian Reining Horse Association Open Futurity. “I had set my eyes on this athletic stallion when he was a yearling and I wanted to buy him. Finally, last year Cappello purchased him and I had the opportunity to show him at the Italian Futurity where things did not go too well for us in the finals,” said Midili about the stallion bred and nominated by Marco Fraschini. “I was fortunate enough to ride him here and words cannot express how important it is for me to have been able to show off his incredible athletic ability and to put this title next to his name.”

Earning reserve honors with a 219.5 was NRHA Million Dollar Rider Cira Baeck riding NF Shining Whiz, a mare by Colonels Shining Gun out of Whowhizthispeppychic owned by David Perneel and Kim Windey, bred by Perneel and nominated by Windey. “My mare did so well for me tonight and I am very proud of her,” said Baeck.

Taking home the L3 Open Championship with a 219 was German Grischa Ludwig riding Gunnanicya MM JB (NRHA Two Million Dollar Sire Gunnatrashya x The Knick Nic) owned by Alexandra Schmitz, bred by Sylvia Maile and nominated by Matthias Mueller. “I am thrilled with this win,” said Ludwig. “I have shown in every edition of the European Futurity but have only won one title here: The L2 Open Championship with Whizoom in 2009. We all want to bring this title home and making it on this horse that is so special to me is amazing. He has matured a lot in these past few months and during this show, he was really easy to prepare.”

Clinching the L2 Open Futurity with a 215.5 score was Giovanni Masi De Vargas riding Bugs At Nite (NRHA Two Million Dollar Sire Gunners Special Nite x Scats Ebony Shiner). The Markel Graduate bred ad nominated by Sheryl Kaefer was purchased as a yearling and is owned by Mariangela Di Pierro. “When I first saw this horse in Oklahoma City at the [NRHA/Markel] Yearling Sale, I knew he would be a good one,” said Masi about the stallion. “I broke and trained him myself and am thrilled with this win.”

Earning reserve honors with a 214 was Alessandro Frassa with his own Spat Gun Showtime (Spat Split And White x Jamie Showgune) between the reins. The pretty mare was bred and nominated by Ambra Alice Bergese.

Owned and ridden by Daniela Saupe, Smart N Surprising (NRHA Five Million Dollar Sire Smart Spook x Just Miss Enterprise) closed his run with a 215.5 and the L1 Open Championship. Bred by Nuith Linthorst and nominated by Lisbeth De Boer, the stallion was shown last year by Daniela’s husband, Michael, at the Italian Futurity where the duo earned the L1 Open Co-Reserve Championship, and by her at the NRHA of Germany Breeders Futurity. “We love this stallion’s breeding and decided to purchase him as a yearling,” said Daniela. “He is a great horse, that both of us love showing, and winning here was hoped for but, considering the level of competition, unexpected.”