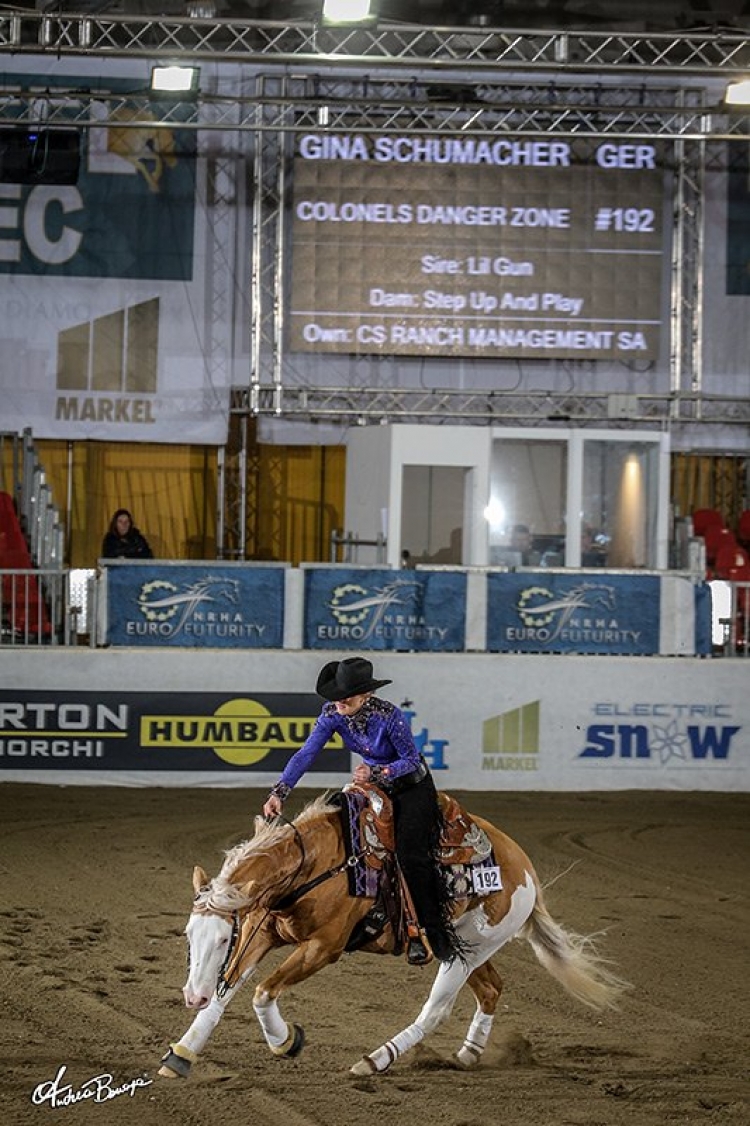 The young German rider, a multiple past NRHA Non Pro World Champion, had written her name in the books on the first day of competition after posting the highest score in the Level (L)4 Non Pro go-round aboard her second mount, Shiney Dun Face. On finals night, riding Colonels Danger Zone (Lil Gun x Step Un And Play), aka ‘Nils,’ Schumacher closed her run with a 217 to clinch the title.

“For some strange reason I really feel the pressure when I come to this show, so this win is twice as sweet,” said Schumacher. “We purchased this stallion last year in the U.S. and I showed him in the Tulsa Reining Classic Futurity. Once we brought him over to Europe, I rode him in the Belgium Futurity and then at the Italian Futurity where we won the go-round and placed third in the finals. He was great for me tonight, gave me the confidence I needed, and helped me bring home the second NRHA European L4 Non Pro Futurity title.”

A point behind the champions, Austrian Wolfgang Hammer and Chicago Lena (NRHA Five Million Dollar Sire Smart Chic Olena x Bright Gun City), closed the evening with the L4 Reserve Championship as well as the L3 and L2 European Futurity Non Pro Championships. “Everything was perfect tonight. He is a super horse with a big heart and…he was bred in Austria,” said Hammer about his horse who was bred and nominated by Sabine Schmid. “I purchased him as a yearling since I loved the way he was bred, and from the moment I saw him, I knew he was going to be a champion.” Hammer was quick to give his trainer Thomas Martinek credit for helping him achieve this goal and looks forward to showing him again later on in the year in the 4-year-old futurities.

Taking the reserve championship with a 215.5 in the L3 and L2 divisions was Fabienne Kuratli-Sutter riding Alpha Top Gun (NRHA Million Dollar Sire Hollywoodstinseltown x Smoking Walla Wanda). The Swiss rider and her gelding bred by Roger Barral and nominated by Alpha Quarter Horses LLC had posted the highest score in the L3 and L2 qualifiers.

It was a special night for Janine Deana Ketterer as she rode Roadgunner (Gunwork x My Diamond Dunnit) to her first NRHA European Futurity title: The L1 Non Pro Championship.

Aboard the pretty mare bred by Fabienne Schadt and nominated by Reto Erdin, the German rider closed her run with a 209.5. “This is truly a very special night for me!” she said. “I’ve only had this mare — who I purchased from Sabine Schmid — for a month and I could not be any happier. I have been riding under the guidance of [NRHA Professional] Morey Fisk since I was a kid and he is the best; he is always there for me with his advice and support.”

With a 208, the L1 Reserve Championship went to Italian Alessandro Bardelli and his Hollywood Lena Whiz (My Showbiz Whiz x Ms Linton Lena), a mare bred and nominated by Ambrosini QH ASD.

Action in Cremona includes a full-slate of NRHA Ancillary classes and will close on Saturday, April 5 with the much anticipated NRHA European Open Futurity Finals.