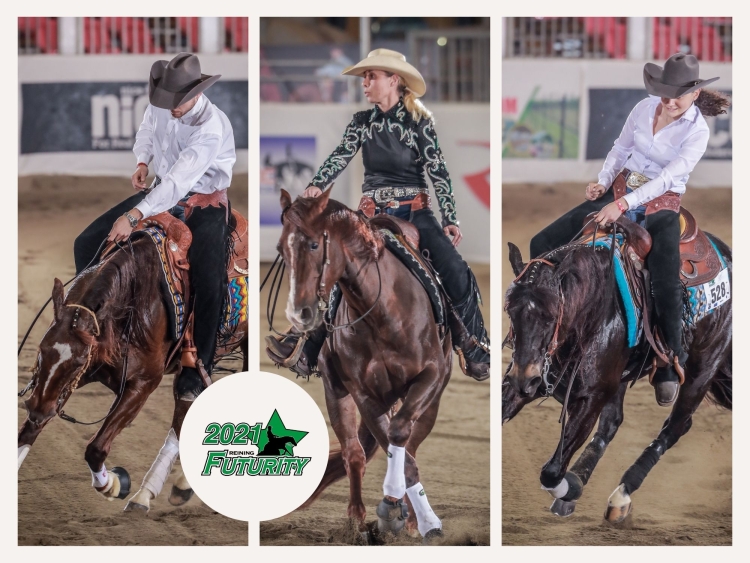 Francesca Ferrarol rode her father Maurizio Ferrarol’s American Quarter Horse mare Hope And Vintage (NRHA Two Million Dollar Sire A Sparkling Vintage x Hope And Surprise) to a score of 214.5 to lead in the $72,295-added Level (L) 4 and $37,210-added 3. The duo also won the AIQH 3-year-old Futurity Level 4 Championship that is held together with the IRHA Futurity and decided after the go round.

“We purchased this mare a month and a half ago and I showed her for the first time in Veneto at the regional futurity. We scored a 213.5 with 1.5 penalty from each judge and that made us decide it would be worth bringing her here,” said the 18-year-old rider who rode to the win in the 2020 NRHA European Derby L4 Non Pro with Wimpy Margarita. “I feel I can really trust her in the show pen. I am very grateful to have the chance to ride her and I am sure that next year we will have a great show season.” Ferrarol also thanked her trainer Italian Professional Mirko Midili for doing an excellent job with her mare and with herself as well. Ferrarol also mentioned that she was looking for the right horse with no luck for over a year until the mare showed up. “I fell in love with her and here we are! I bought her from Edoardo Bernardelli. Nicola Brunelli broke her as a 2-year-old and then Lena [Maas] of Quarter Dream started riding her and also showed her at the Austrian Futurity,” closed Ferrarol.

De Iulio purchased the mare when she was 6 months old. “She grew up at our home and I trained her from the first day we put the saddle on her,” said De Iulio. “I am very proud of her: She was very good at circling today even though it is not the maneuver that I thought she would have performed so well. She has some nice stops too. It is a pity that we were not able to spin as well as she usually can, but we will try to adjust that for the Finals.”

“My horse ‘Pollicino’ was bred by Az. Agr. Piero Cortesi and is trained by Michael Cabianca, who also is my husband, which is never an easy combination,” noted Padoan. “Pollicino has a heart of gold in the arena; the first time I showed him he gave me a lot of confidence. This is the first big event for both of us and today, due to a mistake that cost us a big penalty, we were not able to make the IRHA Futurity Finals. It was in any case great to take home first place in the AIQH Level 2 Futurity. Fingers crossed for the next show season!”

Monday in Cremona will feature the first go round of the $289,181-added IRHA/IRHBA/NRHA Open Futurity.

View the embedded image gallery online at:
https://www.irha.it/en/news/the-2021-6,264-irha-irhba-nrha-futurity-opened-today-with-the-non-pro-qualifier.html#sigProIdea76bc6377
Published in News
Tagged under