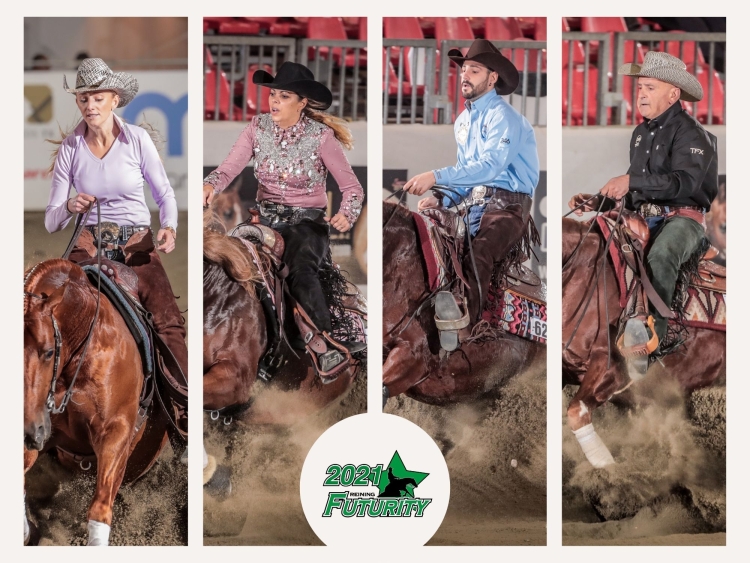 With a 220.5 score, NRHA Million Dollar Rider Cira Baeck and Maria Cecilia Fiorucci’s Americasnextcovrgirl (NRHA Three Million Dollar Sire Walla Walla Whiz x Americasnextgunmodel), a mare bred and nominated by Arcese Quarter Horses USA, closed the day by leading the $75,161*-added Level (L)4 division counting 45 entries. “This is our third show together and she’s always been very quiet in the arena,” said the Belgian rider, head trainer for Elementa in Italy. “I was hoping she would be the same today and she met our expectations. She’s really amazing, has a wonderful personality, and is a great spinner. Besides being athletic, she is truly a show horse.” The duo also lead the IRHA 4-year-old L4 Open Futurity go round.

Tying to the lead in the $56,371*-added L3 division, counting 50 entries, was Italy’s Manuel Cortesi aboard his PC Sliderina One. “She was really good for me today,” said the 2020 NRHA European Futurity L4 Open Champion. “I didn’t show her at the Futurity as I thought she wasn’t ready yet, so this is her first big show and she showed above all expectations. In my opinion she’s still a little green, so I can’t really say how the Finals will be, but I am super pleased with her.” The pretty mare by One Gun out of PC Sliderina For Me is owned and was nominated by Azienda Agricola Piero Cortesi.

Rising star Lena-Marie Maas, assistant trainer at Pietro Marseglia’s Quarter Dream, rode to tie for the high score in the L3 and took the highest score in both the $37,580*-added L2 (counting an impressive 81 entries), and $18,790*-added L1 (counting 51 entries) divisions with Arnels Spat Olena (NRHA Million Dollar Sire Spat Olena x RS Arnels Feo Jac), a stallion owned and nominated by Sabrina Adam of Germany. “All my horses were great for me today and I am so happy,” said Maas who placed all three mounts in the L3, 2 and 1 Finals. “I have no words to express how good they were for me today and how amazing my [Quarter Dream] team is.” The duo also lead the IRHA 4-year-old L2 Open Futurity go-round.

The NRHA European Futurity Non Pro qualifier will be held on Friday, November 11, at 9 a.m. CET.

View the embedded image gallery online at:
https://www.irha.it/en/news/baeck-and-americasnextcovrgirl-lead-the-2021-nrha-european-futurity-open-go-round.html#sigProId7b8bd324d8
Published in News
Tagged under