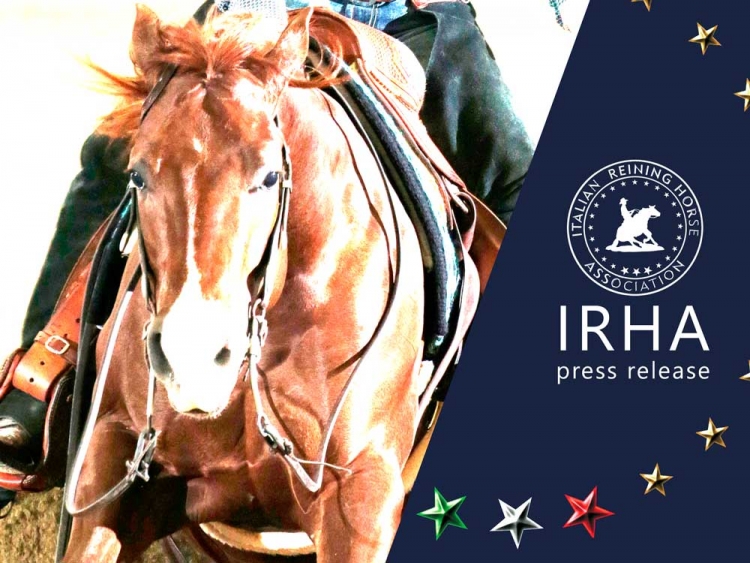 The IRHA Board met in conference call yesterday evening Thursday 29 October and, despite the desire to complete the troubled 2020 show season plagued by the Covid-19 Pandemic, after intense days of analysis and discussion on all elements, aspects and numbers inherent to the possibility of keeping the Big Show at the end of November in Cremona, with great regret and displasure, the decision was made to postpone the entire Special Event: 4-year-old NRHA European Futurity, 3-year-old Futurity Irha-Irhba, and the finals of the Italian Championship hoping to be able to reschedule it for the end of February next year.

Until the end, Irha President Roberto Cuoghi, together with all the Irha Board, verified the aspects concerning the concrete possibility of the Show starting with a confrontation with the local and regional institutions and with the experts, in the awareness of the importance that this Show has always had for the entire Italian and European Reining industry.

The determination of this painful choice was made following several objective considerations: the difficulties imposed by the current Dpcm and the strong probability of further updates of the legislation during the month of November given the growing curve of infections registered throughout the country, the regional ordinances and municipalities already in place and likely to become stricter, the strong limitations imposed in a growing number of European countries traditionally always present, the further complications on logistics and travel, and the limitations imposed on the organizational part such as catering and movement of riders after certain times, etc.. and the real risk of having the Event stopped perhaps a few days after its start (or worse, once the Event has already started), with all supplies such as stalls etc. already in place. IRHA cannot risk — in respect of those who will manage the future of the association — of leaving the association with a negative financial balance that would put at risk the possibility of meeting the commitments made to the members. “After 14 years of presidency, and with the expiry of my mandate at the end of the year, in respect of all our members it is my duty to leave a healthy budget situation,” underlined IRHA President Roberto Cuoghi. “We do not want to leave a negative situation that would risk killing our association without the necessary resources to restart. I also reiterate that it is also a form of respect for all Italian and European members who over the years have strongly believed in the IRHBA breeding program and NRHA Nomination Program by registering stallions and foals for this show who find themselves unable to participate in spite of themselves. Special attention should also be paid to all members of the regions who cannot leave their province right now in order to train for the most important show of the year.

All the above is obviously combined with the strong sense of responsibility that the Association feels towards its members and their families on the health front, even though our shows have all been held in compliance with the current Coni/Fise protocols.

The most heartfelt thanks go to all the sponsors who had already guaranteed their concrete commitment, to the many reiners - riders, breeders and owners - ready to compete in the arena both in the Futurity classes and in the Italian Championship finals and to write together another beautiful page of our beloved sport, to the regions and their management groups who, among many difficulties, at least managed to complete the regional and start-up season thanks to the invaluable work done by their respective presidents and directors. Heartfelt thanks to all, certain that you will understand and share the spirit of this painful decision.

"I was proud to be able to present for the first time a show that included the two most important events of the European program" underlined President Cuoghi.

The IRHA Board reiterates that the event scheduled for the end of November is already to be considered as rescheduled for the last week of February 2021 (except for a protracted Covid 19 emergency). All the details will soon be communicated and, in this respect, we are already working with NRHA and our partners on the European Board and will discuss these in a conference call tonight in order to ensure that once again the two Futurities will take place concurrently

Hoping that these winter months can be decisive in the fight against the pandemic and that the measures adopted will help us at least to normalize the situation, we all sincerely hope to be able to return soon to menage our events in the best way, with the pavilions and stands full of people and passionate fans, with their applauses, and the authentic passion that has always been the real engine of our sport.

Published in News
Tagged under